Reaching a high performance in controlling a brain-computer interface requires several sessions of training. Even though previous studies suggested the involvement of a distributed network, neural mechanisms underlying this learning process remains poorly understood. A recent work of our group led by J. Guillon proved that combining multimodal neuroimaging data from a network perspective can reveal properties that cannot be detected by approaches relying on a single modality.
In this study, we integrated multimodal brain network properties from electroencephalography (EEG) and magnetoencephalography (MEG), known to be complementary. More specifically, we studied coreness properties, defined as the probability for a given node to belong to a group of tightly connected nodes. We computed these properties both at the single modality level (EEG or MEG) and at the integrated level.
We observed similar trends in the evolution of the network properties over the BCI training sessions between single and multimodal levels. Notably, we obtained a significant association with the future BCI performance only in the case of the coreness properties resulting from the M/EEG integration. These findings suggest that this approach could give access to markers of BCI learning. 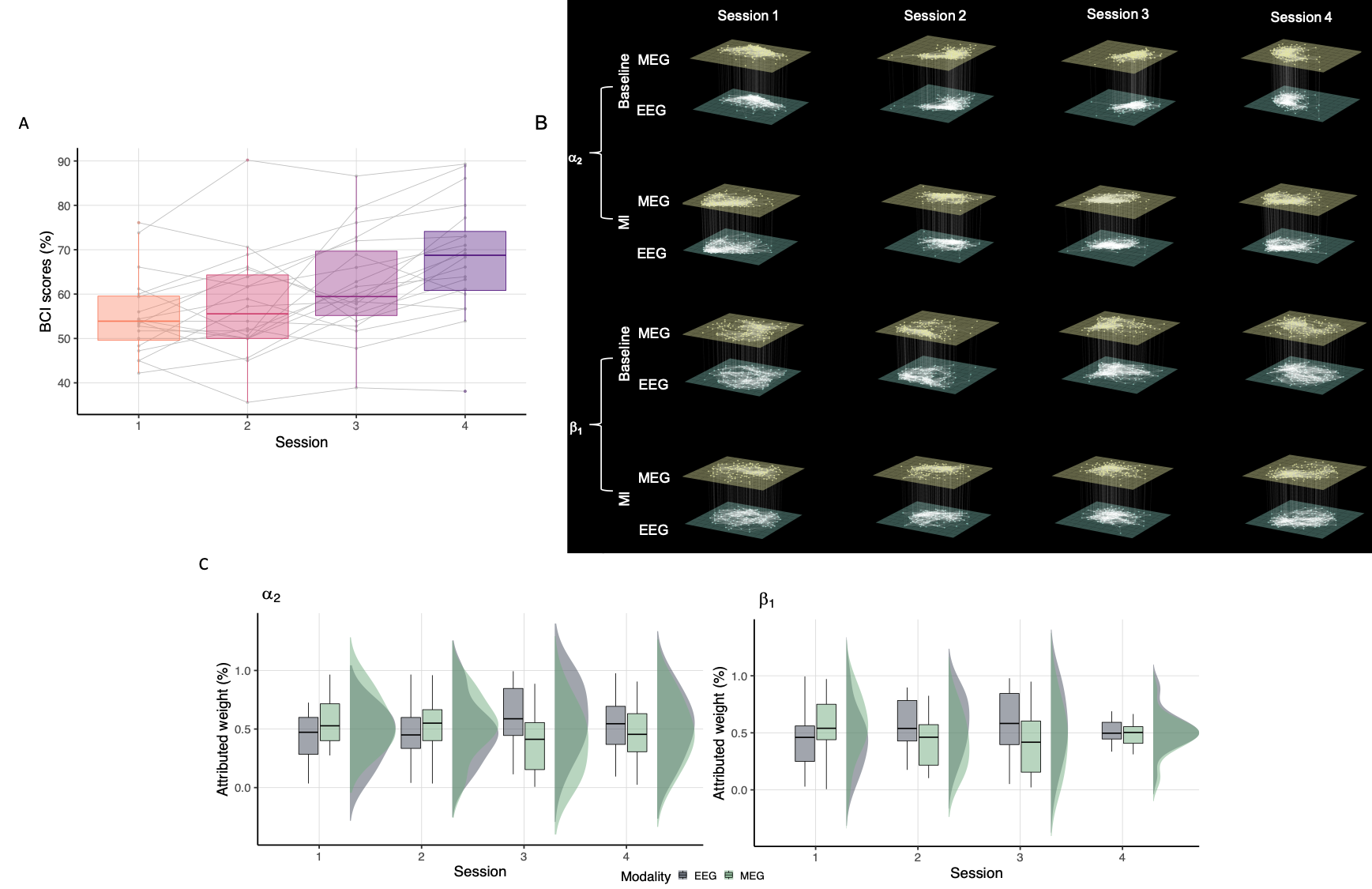 Objective
Brain-computer interfaces (BCIs) constitute a promising tool for communication and control. However, mastering non-invasive closed-loop systems remains a learned skill that is dicult to develop for a non-negligible proportion of users. The involved learning process induces neural changes associated with a brain network reorganization that remains poorly understood.

Approach
To address this inter-subject variability, we adopted a multilayer approach to integrate brain network properties from electroencephalographic (EEG) and magnetoencephalographic (MEG) data resulting from a four-session BCI training program followed by a group of healthy subjects. Our method gives access to the contribution of each layer to multilayer network that tends to be equal with time.

Main results
We show that regardless the chosen modality, a progressive increase in the integration of somatosensory areas in the alpha band was paralleled by a decrease of the integration of visual processing and working memory areas in the beta band. Notably, only brain network properties in multilayer network correlated with future BCI scores in the alpha 2 band: positively in somatosensory and decision making related areas and negatively in associative areas.