Frontotemporal dementia (FTD) and amyotrophic lateral sclerosis (ALS) are devastating neurodegenerative diseases. They may have a common genetic cause, the most typical being a mutation in the C9orf72 gene. Since there is no cure so far, it is essential to identify biomarkers of disease progression that could be used to evaluate the efficacy of clinical trials. The goal of this study was to assess the use of microRNAs (small molecules that regulate gene expression) found in blood plasma as progression biomarkers of FTD/ALS. We analysed blood samples from 115 subjects (FTD/ALS patients, presymptomatic mutation carriers and healthy controls) and identified four differentially expressed microRNAs. We then built models based on the expression levels of this microRNA signature, which were able to predict if a new sample came from a patient, a presymptomatic carrier or a healthy control. Our results highlight the potential of plasma microRNAs as progression biomarkers for FTD/ALS, which could provide a non-invasive method to monitor new disease-modifying therapies.

Published in Journal of Neurology, Neurosurgery and Psychiatry the 25/11/2020
View at publisher 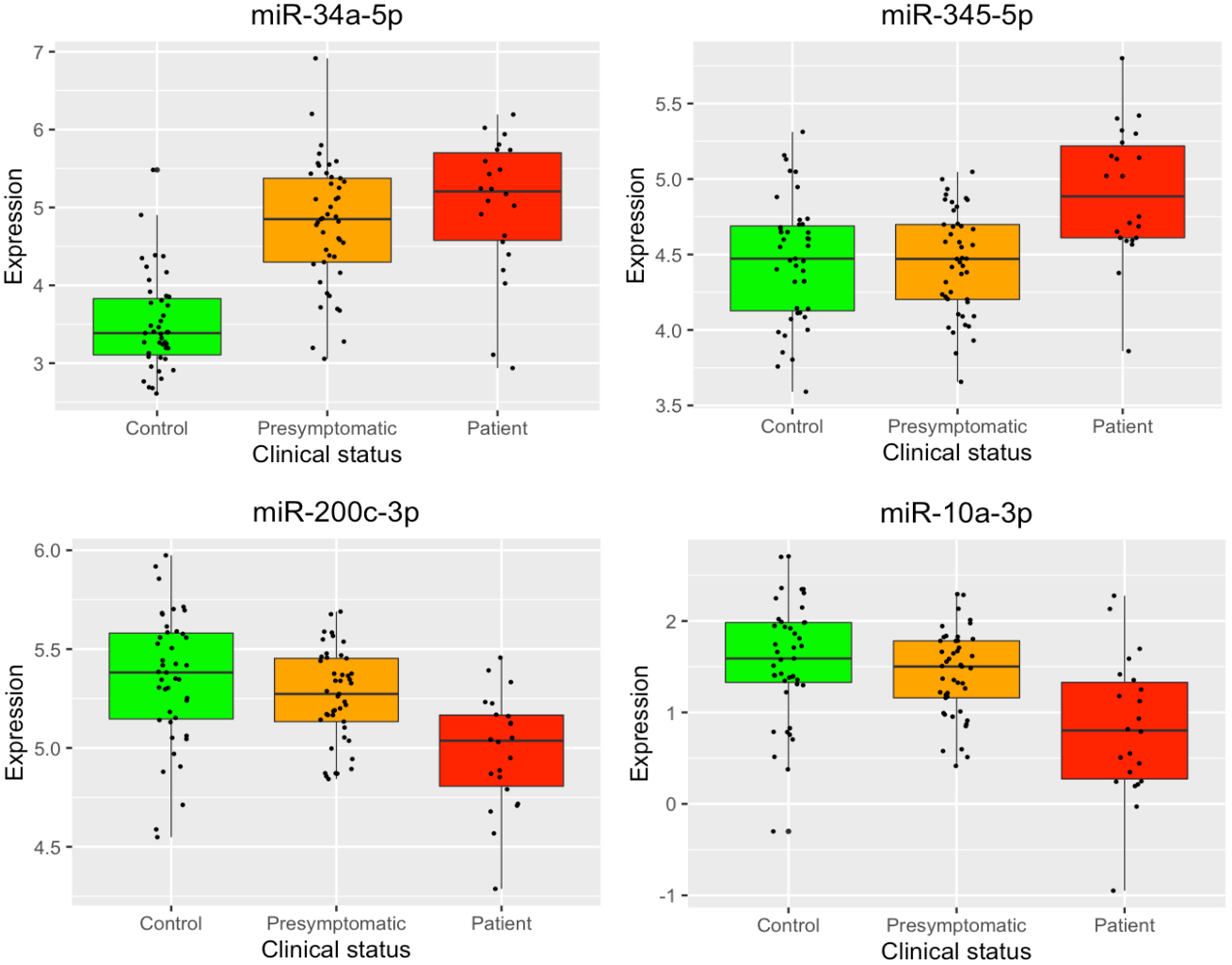 This is the description of the image!

Methods: The PREV-DEMALS study is a prospective study including 22 C9orf72 patients, 45 presymptomatic C9orf72 mutation carriers and 43 controls. We assessed the expression levels of 2576 miRNAs, among which 589 were above noise level, in plasma samples of all participants using RNA sequencing. The expression levels of the differentially expressed miRNAs between patients, presymptomatic carriers and controls were further used to build logistic regression classifiers.

Results: Four miRNAs were differentially expressed between patients and controls: miR-34a-5p and miR-345-5p were overexpressed, while miR-200c-3p and miR-10a-3p were underexpressed in patients. MiR-34a-5p was also overexpressed in presymptomatic carriers compared with healthy controls, suggesting that miR-34a-5p expression is deregulated in cases with C9orf72 mutation. Moreover, miR-345-5p was also overexpressed in patients compared with presymptomatic carriers, which supports the correlation of miR-345-5p expression with the progression of C9orf72-associated disease. Together, miR-200c-3p and miR-10a-3p underexpression might be associated with full-blown disease. Four presymptomatic subjects in transitional/prodromal stage, close to the disease conversion, exhibited a stronger similarity with the expression levels of patients.

Conclusions: We identified a signature of four miRNAs differentially expressed in plasma between clinical conditions that have potential to represent progression biomarkers for C9orf72-associated frontotemporal dementia and amyotrophic lateral sclerosis. This study suggests that dysregulation of miRNAs is dynamically altered throughout neurodegenerative diseases progression, and can be detectable even long before clinical onset.